Rotary clotheslines are a popular choice among Kiwi homeowners for their reliability and convenience. With their large line space, they are perfect for families who do a lot of washing or people who want to be able to dry sheets and towels outside rather than using a drier.

Choose from a fixed head or folding head clotheslines

The original rotary clotheslines were typically fixed head hoists, which were put into the ground and formed a permanent part of the outdoor section.

As sections became smaller and space was at more of a premium, folding head clotheslines became more popular. These can be folded down when not in use and can also be removed easily to clear the space in your garden.

Both types range up to four or five metres in diameter, but fixed head clotheslines offer more line space. 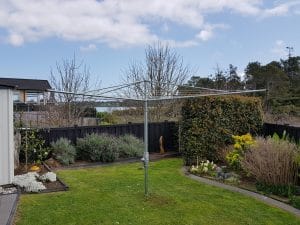 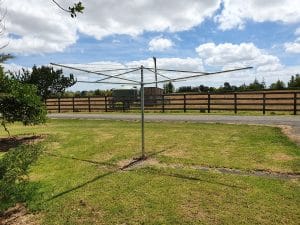 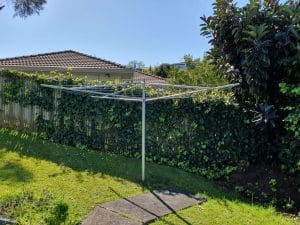 Hills clotheslines have been a staple of New Zealand and Australian backyards since the 1940s and they are still going strong today.

The heritage hoist clothesline listed below is one of the brand’s most popular choices and is ideal for people who do a lot of washing. You can even easily hang king-size sheets on the line space offered by this clothesline. Made from galvanised steel and galvanised steel wire, these lines are very durable, which is reflected in their 10-year warranty. 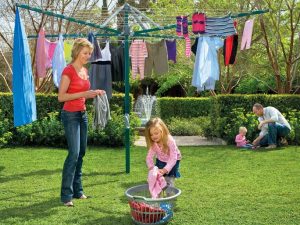 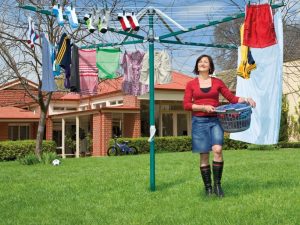 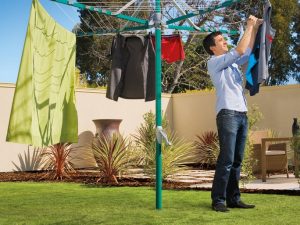 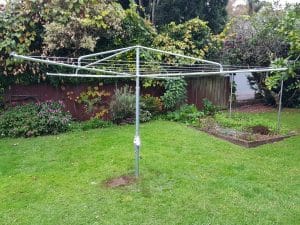 Installing a rotary clothesline can be a DIY job. See our Install a Galvanised Clothesline Video. You need to dig a hole of appropriate depth, sink your ground socket and then concrete it in place making sure your washing line will be straight. Once the concrete is dry, you can put the main pole into the ground socket and then set up your line and tension the wires accordingly.

Of course, if you are in Auckland and you don’t have the skills, time or inclination to install your rotary clothesline yourself, you can always get us to install your clothesline for you. We offer an installation service Auckland-wide, and we’ll even remove and take your old washing line away if you have one.

Browse our range of fixed head and folding head rotary clotheslines, and then get in touch to place your order.

Need a new washing line or some TLC for your existing line?

If you are looking for a new clothesline talk to us about our stock of quality rotary lines and folding frame washing lines. We stock high-quality brands designed to withstand New Zealand conditions. We ship across the country and if you are in Auckland or Christchurch we can arrange installation for you to at an affordable price.

If you are in Auckland or Christchurch and your existing line could do with some TLC, we also offer repairs and rewiring for most types of lines using quality spare parts.

Give us a call to find out more.